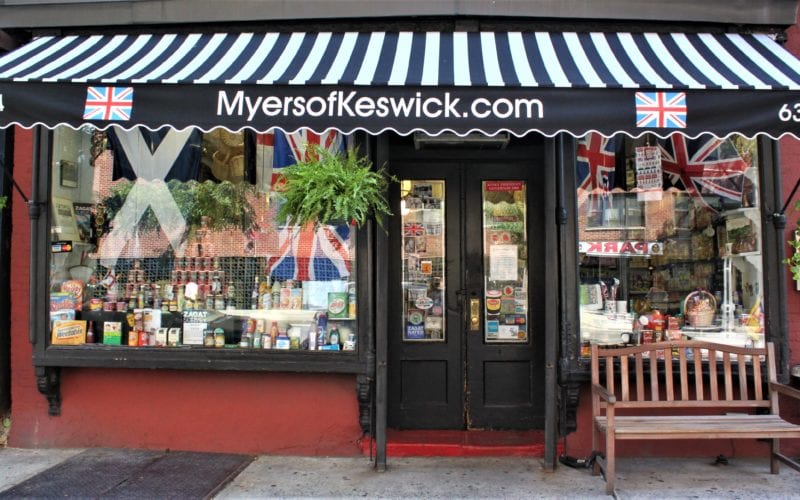 Anglophiles will revel in a visit to New York City’s venerable British grocery store, Myers of Keswick (pronounced ‘Kezzick’). The first thing that catches your eye as you approach the West Village store is the jaunty striped awning. Take a closer look and you’ll find that the windows are filled with beloved British products like Weetabix, HP Sauce, Bird’s custard, and Green’s cake mixes.

Step inside and you’ll find yourself in Anglophile heaven. The store’s shelves are overflowing with British sweets, biscuits, teas, and savory foods such as Branston pickle, Pot Noodles, and Heinz baked beans (a best seller at the store for more than 30 years). There’s also a large selection of tea towels, flags, and other memorabilia. At Christmas and Easter, the store is brimming with holiday treats from the UK.

THE MYERS OF KESWICK DIFFERENCE

But what really makes Myers of Keswick unique is the large glass display case filled with sausages and savory delights made from recipes that have been in the Myers family for generations. You’ll find fresh Cumberland sausages, bangers, English bacon, and black pudding. There’s also a large selection of fresh, ready-to-eat foods, including meat pies, sausage rolls, Scotch eggs, shepherd’s pie, and pasties. Additional offerings, such as gluten-free Cumberland sausages, are available by special order.

The store also sells fresh scones that rival the best scones I’ve had in England. Apparently, I’m not the only one to rave about them; the store’s owner, Jenny Myers-Pulidore, told me they have lots of fans. The recipe was perfected by her head chef, Nino, who’s been with Myers of Keswick for more than 30 years. You’ll also find fresh hot cross buns at Easter and mince pies at Christmas. The mince pies are extremely popular, and the store starts taking orders for them in September.

All the fresh food is made on the premises. I was awestruck by the range of offerings on my visit. Everything I tried was excellent and, as the Brits would say, it was all quite “moreish,” meaning you’ll want to eat more and more.

I recently spoke with Jenny Myers-Pulidore to learn more about the store and its history. Her parents, Peter and Irene Myers, founded Myers of Keswick in 1985. Jenny and her husband, Paul, took over in 2008.

Jenny proudly notes that she’s the fourth generation to work in the family business. Her great-grandfather started the family’s original butcher shop in Keswick, a small town in England’s Lake District. Her grandfather took over from him, and then her father established the tradition in America. Many of the recipes and techniques used in the store’s food production date back to her great-grandfather.

Jenny’s father arrived in New York as a tourist in 1972, and he ended up buying a share in a local bar and marrying a local girl. When Peter’s father came for a visit, he drew on his professional skills to make sausage rolls and Cornish pasties for the bar’s happy hours. They were a big hit, so Peter kept up the practice. Soon he was also supplying other bars and eateries.

In 1985, he and Irene opened a shop dedicated to selling sausages, meat pies, and other savories made from the family’s cache of traditional recipes. They named the store Myers of Keswick as a tribute to Peter’s hometown.

Jenny notes that her father and grandfather aren’t the only family members who played a role in bringing the Myers brand to America. She recalls that her grandmother came for Christmas the first year the store was open, and Peter soon set her to work making mince pies. They sold like hotcakes and they’ve been a Myers of Keswick tradition ever since.

I asked Jenny if she had always planned to join the family business. She says she helped in the shop when she was growing up, but she didn’t plan on making it her life’s work. She studied marketing in college and landed a job in the fashion industry after graduation. She hesitated when her parents asked her to take over the business in 2007, but her fiancé, Paul, encouraged her and she decided to take the plunge.

Fast forward a dozen years, and Jenny is happily immersed in the job. She even takes charge of sausage production every now and then, turning out Cumberland sausages, bangers, and chipolatas just like her father, grandfather, and great-grandfather before her.

As much as Jenny enjoys working in the kitchen, it’s the business side of things that keeps her on her toes. Queen Elizabeth’s Diamond Jubilee and the recent spate of royal weddings and births have generated a lot of business for the store. “The day before Harry and Meghan’s wedding was like Christmas for us,” Jenny recalls. “People were lined up all day, buying food for parties.” She admits they were caught a bit off guard by the huge demand.

She has also worked on expanding the wholesale side of the business. You can now enjoy Myers of Keswick products at several popular New York eateries, including Keith McNally’s Augustine and Balthazar restaurants, Jones’ Wood Foundry, The Dead Rabbit, and the Plaza Hotel. Jenny would like to add more retail outlets, but their current kitchen is too small. She’s mulling over the possibility of expanding to a larger commercial kitchen in order to increase production, but nothing is set in stone. “I think my father would be proud to see me expand the wholesale aspect of the business,” she says. I’m sure earlier generations of Myers would approve too.

Jenny says that Brits have a strong sense of pride in their heritage. This sense of pride helped fuel her father’s determination during the store’s early years, and it influences Jenny today. But she also makes a point of looking beyond the store’s heritage as she guides the business.

For example, Myers of Keswick has always attracted a large British expat clientele, but Jenny notes that today’s expats have different tastes and brand loyalties than expats of 25 or 30 years ago. She relies on her business and marketing experience to monitor and adapt to these changing tastes. That means you’ll find a mix of longstanding favorites and newer favorites when you visit.

Jenny’s daughters enjoy helping in the store and I asked if there would be a fifth generation running Myers of Keswick someday. “It would be amazing if my daughters want to take over, but I want them to come into it on their own. It should be their own decision,” she says firmly.

That’s exactly how it should be for a family whose determination and commitment to excellence has expanded the family business from a small butcher shop in Keswick, England to a New York City institution.

The store also ships its products via FedEx. At present, customers must call the store to place orders, but Jenny is working on a new website that will let customers order online. It should be up and running later this year, making it easy to bring Myers of Keswick to your front door.